Few older adults use medical marijuana, a new national poll finds, but the majority support its use if a doctor recommends it.

Most accept its use with doctor’s recommendation, but want more research, U-M/AARP National Poll on Healthy Aging finds

ANN ARBOR, MI – Few older adults use medical marijuana, a new national poll finds, but the majority support its use if a doctor recommends it, and might talk to their own doctor about it if they developed a serious health condition.

And two-thirds say the government should do more to study the drug’s health effects, according to the new findings from the National Poll on Healthy Aging.

While more than two-thirds of those polled said they thought that marijuana can ease pain, about half said they believed prescription pain medications were more effective than marijuana.

The poll was conducted in a nationally representative sample of 2,007 Americans between the ages of 50 and 80 by the University of Michigan Institute for Healthcare Policy and Innovation. It was sponsored by AARP and Michigan Medicine, U-M’s academic medical center.

“While just six percent of our poll respondents said they’d used marijuana for medical purposes themselves, 18 percent said they know someone who has,” says U-M’s Preeti Malani, M.D., director of the poll and a specialist in treatment of older patients. “With medical marijuana already legal in 29 states and the District of Columbia, and other states considering legalizing this use or all use, this is an issue of interest to patients, providers and policymakers alike.”

She notes that the poll results indicate older Americans have a sense of wariness, rather than wholehearted acceptance, around medical use of marijuana. This may be surprising to those who think of the Baby Boom generation – who are now in their mid-50s to early 70s -- as embracing marijuana use in their youth in the 1960s and 1970s. 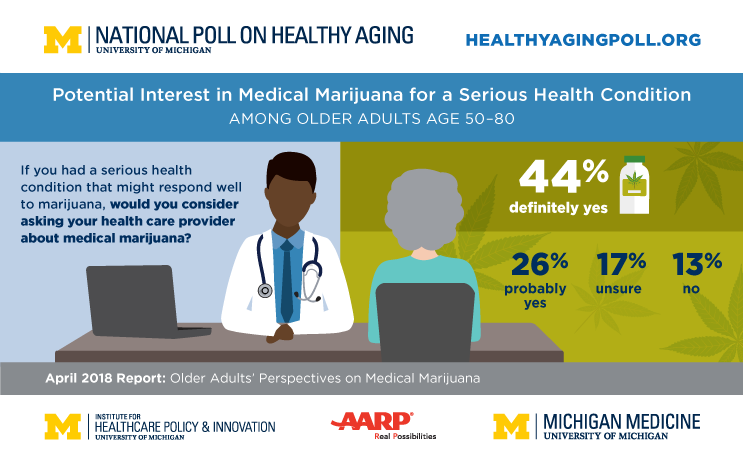 The poll sheds new light on older Americans’ attitudes toward the use of marijuana to control pain – one of the most common conditions cited in state medical marijuana statutes.

Just under one-third of respondents said they feel that marijuana definitely provides pain relief, and another 38 percent said it probably does. But only 14 percent thought marijuana was more effective than prescription pain medication, while 48 percent believed the opposite and 38 percent believed the two were equally effective. When it came to controlling dosages for pain relief, though, prescription pain medicine won out: 41 percent thought it would be easier to control dosage with medication.

The poll also asked respondents about negative effects of both substances. In all, 48 percent thought prescription pain medicines are more addictive than marijuana, and 57 said that such medicines have more side effects than marijuana.

“These perceptions of relative safety and efficacy are important for physicians, other providers and public health regulators to understand,” says Malani. Marijuana use, particularly long-term use, has been associated with impaired memory, decision making and ability to perform complex tasks.

The widespread support by older Americans for more research on the effects of marijuana is especially significant, she says, given the growing legalization trend in states and the continued federal policy that marijuana use is illegal.

“Although older adults may be a bit wary about marijuana, the majority support more research on it,” says Alison Bryant, Ph.D., senior vice president of research for AARP. “This openness to more research likely speaks to a desire to find safe, alternative treatments to control pain.”

Research on marijuana’s effects and related issues can be done under carefully controlled circumstances, but few studies have included older adults. The new poll results indicate an appetite for further government-sponsored research, including government-standardized dosing.

Malani, a professor of internal medicine at the U-M Medical School who specializes in infectious diseases and geriatrics, notes that providers should be routinely asking older patients about marijuana use.

Only one in five poll respondents said their primary health care provider had asked whether they use marijuana. A slightly lower percentage said they thought their provider was knowledgeable about medical marijuana – but three-quarters said they simply didn’t know how much their provider knows about the topic.

Still, 70 percent of those who answered the poll said they would definitely or probably ask their provider about marijuana if they had a serious medical condition that might respond to it. That means providers need to be ready to answer questions and provide counseling to patients, especially in states where medical marijuana is legal.

The poll results are based on answers from a nationally representative sample of 2,007 people ages 50 to 80. The poll respondents answered a wide range of questions online. Questions were written, and data interpreted and compiled, by the IHPI team. Laptops and Internet access were provided to poll respondents who did not already have it.

With medical marijuana already legal in 29 states and the District of Columbia, and other states considering legalizing this use or all use, this is an issue of interest to patients, providers and policymakers alike.